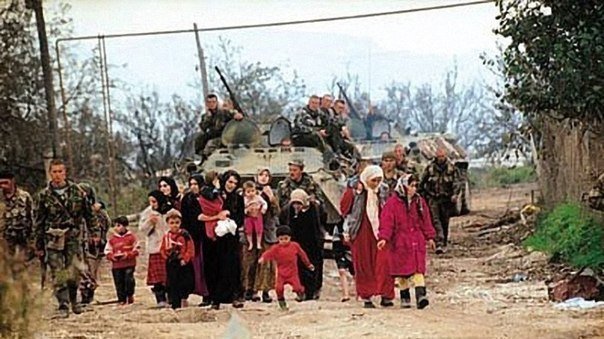 Petition to the President and CEO of the Canadian Museum for Human Rights in Winnipeg, Manitoba.

We, the undersigned, are petitioning you and the members of your staff to open a permanent exhibition hall at the Museum for Human Rights on the Humanitarian Catastrophe of the Chechen People and show visitors the album „When Children Go Gray“ created by a Chechen writer Mayrbek Taramov in collaboration with Olesia Kornienko, as a personal testimony of eyewitnesses who experienced the tragic events.

Your Museum has exhibits about the Holodomor famine in Soviet Ukraine, which was carried out in 1932-1933 on Stalin’s orders. The starving Ukrainians fled with their families to the North Caucasus, where the Chechens welcomed them, gave them a roof over their heads and shared their last crust of bread. Only thanks to this noble humanitarian aid did thousands of Ukrainians and their children survive; many families became kindred.

Today, there is no exposition in your Museum highlighting the tragic history of the Chechen nation which was subjected to a total deportation by Stalin’s government on February 23, 1944, including the heroes of World War II, who were awarded military decorations. On this deportation, the European Parliament adopted a Resolution of February 26, 2004.

The Russian Federation replaced the Bolshevik USSR but the essence of the regime has not changed. Two Russo-Chechen wars that were started by Boris Yeltsin (1994-1996) and by Vladimir Putin (1999-2009) resulted in the deaths of more than 300,000 Chechen civilians, including more than 40,000 children. These irrefutable facts have been documented in media sources such as „Memorial“ and „Novaya Gazeta“. The exposé materials were also submitted by the human rights organization „Peace and Human Rights“ (Said-Emin Ibragimov) to the International Court of Justice in the Hague. The album „When Children Go Gray“ by Mayrbek Taramov and Olesia Kornienko recounts the life stories of Chechen children killed and maimed in the two wars. The eyewitness accounts should be accessible to the civilized world through the active involvement of the Canadian Museum for Human Rights.

Regrettably, for many decades the international community has been turning a blind eye to the crimes of the Russian regime in Chechnya, ignoring the facts of the mass murder of Chechens of all ages. With the tacit consent of Western democracies, the Chechen nation in its entirety, from the young to the old, is routinely called a terrorist ethnic group by the Kremlin propagandists. No other nationality in the history of mankind has been labelled as such. The writer, publicist and human rights activist Mayrbek Taramov expresses his heartfelt hope that the Canadian Museum for Human Rights will be the one to make this information public.

The purpose of our Petition is to enlighten and inspire people of good will throughout the civilized world to become defenders of the Chechen people. It is our hope that the Canadian Museum for Human Rights, in the spirit of its noble mission to educate and share factual and truthful information, will take the first step toward restoring historical justice for this small nation and especially for its future generations, its children. The permanent display dedicated to the Humanitarian Catastrophe of the Chechen People will be a real contribution to world peace: the exhibitions of materials and documented testimonies will facilitate this. We are confident that the Canadian Museum for Human Rights is capable of leading the vital work of establishing an equal, just, free and peaceful international community.

We, the undersigned, are calling on the staff of the Canadian Museum for Human Rights: time is of the essence! The Museum as a human rights organization can and should be in the vanguard of the civilized international community and become its voice. Put all your efforts into making public the many violations of human rights inflicted on the Chechen nation and we, the undersigned, with your cooperation will help bring about the restoration of historical justice and the universal human rights for the Chechen people.

To sign the Petition to the Canadian Museum for Human Rights in Winnipeg, Manitoba:

Akhmed Zakayev – Chairman of the Government of the non- recognized Chechen Republic of Ichkeria, United Kingdom;

Inna Kurochkina – Special Representative of the Prime Minister of the Chechen Republic for Special Assignments;

Hussein Iskhanov – member of the Chechen Parliament, head of the Cultural Center in Vienna, Austria;

Francesco Benedetti – journalist, researcher of the history of the Chechen Republic of Ichkeria in Italy;

Rosa Dunajeva, Representative of the Chechen Republic of Ichkeria in Austria, a member of the cultural center in Vienna „Ichkeria“;

Anna Karelina, A Grandmother Who is Concerned in What Kind of the World Her Grandkids Will Live in, Toronto, Ontario, Canada;