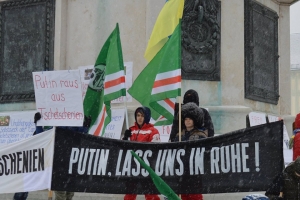 Protest against political murders by the Russian secret service in Europe

A few days ago, Zelimkhan K., a Chechen refugee, was shot dead on the street in Berlin. According to reports by the German press, the perpetrator was a Russian who apparently had connections to the Russian embassy or even to the secret service FSB. The relatives of the victim have confirmed in an interview that they assume that it is a political murder. Like the case of Umar Israilov, who was murdered in Vienna in 2009.

In memory of the dead and as a sign of protest against the killing of Chechen citizens in Europe by Russian services respectively Kadyrov, the cultural association ICHKERIA is holding a rally in front of the Russian Embassy. It is time to send a signal against the Russian power methods, which do not shy away from the elimination of political opponents abroad. Everybody is welcomed invited to join the protest and stand for freedom and peace.